Short stories written by my son

Given below are two short narratives written by my elder son who is 8 years old.

Unlike our Indian education system, school books are not sent back home everyday so I happened to read these in his English draft book during our recent parent-teachers meet. My Samsung Galaxy quickly helped me capture these stories before I had to return the books. Stories that give me an insight into my son's thoughts, his innocence, his little world comprising of his family and what took me by surprise, his sense of humour! In the near future, I see these stories taking better shape, getting more detailed and comprising of a bigger world, a world where immediate family might have to take a back-seat. A seat where I will sit and watch and judge my motherhood.


WAR
One day there was a boy called Ushaan who was playing with his little brother Fravash, when suddenly they heard a loud BANG!
Ushaan and Fravash shouted "HELP!" as their mother had told that when a cannon fires that means that there is war.
They could hear helicopters hovering above their heads when their mother yelled "Ushaan, Fravash come quickly before they get you! When they reached home, Ushaan hid behind the cupboard and so his brother and mother.
An American soldier named Kaiwan, found them first but instead of shooting them, he fell in love with Mehroo, their mother.
He asked if he could marry her and she agreed and so did Ushaan and Fravash as they'd never had a father. So Kaiwan took them back to America. 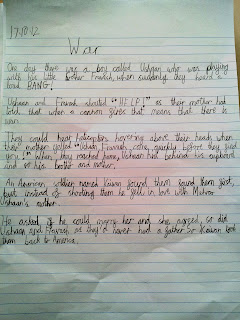 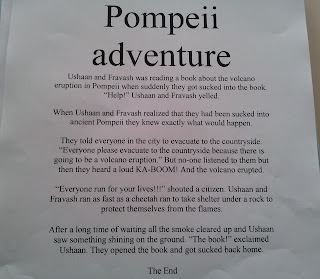 After a long time of waiting all the smoke cleared up and Ushaan saw something shining on the ground. "The book!" exclaimed Ushaan. They opened the book and got sucked back home.
THE END